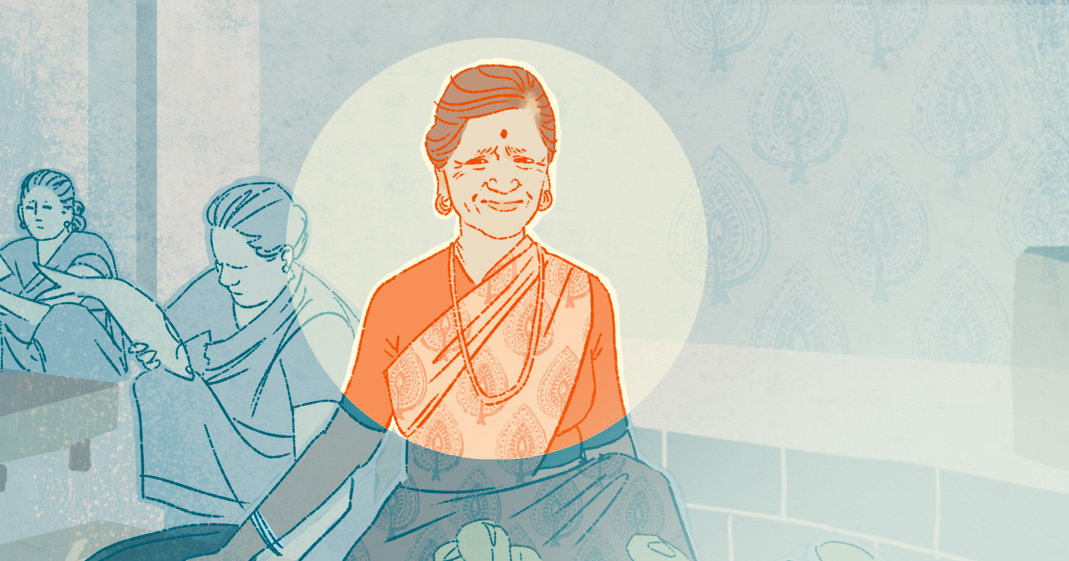 The Brave Fisherwoman: In Remembrance of Hira Goma

I share this story to talk about a dear patient and friend, Hira Goma, whose determination and inner strength in the face of her cancer diagnosis have been an inspiration to me for the many years I have known her. Just recently and out of nowhere, we lost Hira after the sudden onset of a malignancy unrelated to her cancer, which took her away from us in just two weeks.

I pray that Hira’s family will find the strength to cope with her passing and that all who knew and loved her will also find whatever we need to help us come to terms with her passing. I also hope that in telling her story, I can in some small way celebrate and honor her life and her strength and that she can continue to inspire others.

Hira Goma was a deceptively diminutive Koli fisherwomen from the seaside village of Pachubandar, which lies to the far North West of Mumbai and has been home to generations of Kolis who are the city’s traditional fishing community. Like many other women in her village, Hira’s day began at the break of dawn. Morning chores included cooking for her large extended family, after which she took off to the wharf to get her fish for a day of selling in the bazaar. She was outspoken and cheerful and freely interacted with everyone.

Alongside her husband and other menfolk in the family, she was equally responsible for providing the economic stability her family needed and therefore commanded great respect. Hira returned home only after the heavy load on her head was sold, a task that could take all morning and afternoon to accomplish.

Times were very tough for Hira and her family during that time. The reckless urban growth that spread well beyond the city limits had begun to ruin the sea and the coastline which was their only source of livelihood, as the fishing expeditions returned with fewer and fewer baskets of increasingly smaller fish. The Kolis were facing a severe crisis already when cancer reared its ugly head in their midst. And it threatened to take away Hira, the mainstay of the family.

The family was devastated. Though Hira was childless, she was a mother to all her nephews and nieces. Her mother was distraught when Hira received her diagnosis, crying out that it was she, the elder woman with a long life behind her that should be taken away by cancer. Beyond the immediate family, the whole community was in shock.

Her husband adored her and was determined to do all that was needed to save her. After all, he said, “we battle the forces of nature when we go out to the sea. We are hardy people and we are ready to die earning our livelihood. What is cancer in the face of the dangers we face every day?”

Harnessing whatever resources they could garner, no stone was left unturned in seeking medical advice in the little fishing village. With time and great effort, they managed to get the diagnosis confirmed and found their way to Tata Memorial Hospital. Once there, it was just another step to the referral to The Max Foundation and access to the treatment that would keep Hira alive and well for over 10 years – Glivec.

In all these years, through all of the struggle and emotional upheaval of her diagnosis, Hira remained her active and busy self. She never missed her daily routine of the wharf and the bazaar, nor did she let her work and routine come in the way of her managing her CML.

Hira never missed a dose, nor neglected to attend her follow up visits, measuring the distance between the city and her fishing village not in kilometers, but in the benefits she received from her treatment. She knew the daily medication kept her alive and active, but would say with a shy smile that lights up her face that even more important than the medicine was the love of her husband. He stood by her throughout the years and never let her feel that her cancer has diminished her in any way, affected her ability to work and live her life as normally as before.

She said that to find The Max Foundation and her dear Amma was like meeting another family – “All the fear and worries disappeared when I met The Max Foundation. Over the years this bond has only grown stronger and deeper”. She was a dear friend and we cherished her, for her personal strength in the face of cancer, for her determination to live life as fully as before her diagnosis, and for her generous and warm spirit.

Hira Goma stood tall and proud and wore her cancer like a medal. I will miss her dearly. Death can never take away life. And it is that life we must celebrate. Even in death. Especially in death.

In honor of Hira, we have published her story as an illustrated patient journey. View and share Hira’s story.

Viji is based in Mumbai, India and has provided support to people living with cancer for over 30 years.

Go on the Patient Journey

Join Tony as he shares his story of learning about his cancer, gaining access to life-saving medication, and connecting with a community of care.
Follow Tony's Journey