In April of 2015, a magnitude-7.8 earthquake, known as the Gorkha earthquake, devastated Nepal, crumbling multi-story buildings in its capital, Kathmandu. In the midst of the aftermath, Nabin, a 41-year-old pharmacist living in a village outside of Kathmandu, struggled to find a remedy for a persistent fever and cough.

Roads were covered with rubble, and due to collapsed homes many of the city’s residents were sleeping on the streets in tents; transportation was not an easy feat. Despite the harsh conditions, Nabin was able to visit Bir Hospital, and after trying multiple remedies and undergoing multiple consultations and CT scans, a lung cancer diagnosis was confirmed.

Nabin and his wife were shattered.

To obtain treatment, Nabin traveled the day-long trip to Delhi, India, where doctors at Rajiv Gandhi Hospital prescribed him crizotinib, an oral targeted therapy not available in Nepal that is used to treat specific mutations of advanced non-small cell lung cancer (NSCLC).

But the treatment came at a great cost; the financial burden and long-distance travel were unsustainable. A year into his treatment, Nabin could no longer afford the medication and discontinued his treatment. He began searching for alternative help from local institutions, which ultimately led him to The Max Foundation’s access program.

The Case for Lung Cancer Awareness

However, these 23 patients make up a very small fraction (less than one percent) of the total number of cancer patients that are part of Max Access Solutions.

Why are there so few lung cancer patients in our access program?

First, crizotinib is used to treat two relatively rare mutations in lung cancer: the anaplastic lymphoma kinase (ALK) and ROS1 mutations. Lung cancer is challenging to diagnose and difficult to detect in its early stages. Most patients who are diagnosed are already in the late stages of the disease. According to the American Cancer Society, lung cancer is the leading cause of cancer deaths among women and men.

On top of that, many of the people we serve live in under-resourced countries, where they have increased difficulty accessing the mutation testing needed to be eligible for the crizotinib access program.

A will to beat all odds

In August of 2018, we received a letter from a woman asking for help accessing treatment for her boyfriend, Chris, who’d been diagnosed with lung cancer a few months prior. 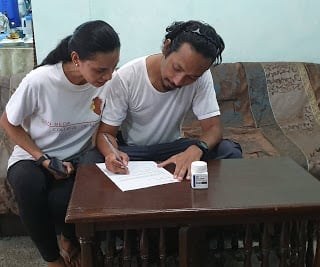 Chris and his girlfriend reviewing treatment information forms upon its arrival at the clinic.

Chris is a 39-year-old police officer living in the Philippines who’s known for being tough, running marathons and hiking in his spare time. He never imagined he’d receive news of a life-threatening disease. Chris’s family and friends came together to help him pay for treatment, but it was not enough to sustain access. Unwilling to give up, his girlfriend wrote to us, and working with his physician, we were able to enroll him into our crizotinib access program.

In light of Lung Cancer Awareness Month, we share Chris and Nabin’s stories to remind ourselves and our global community that even through harsh conditions, there can be hope.

Today, Nabin is focused on regaining his stamina and health. He regularly attends patient support meetings and spends his time with his family and friends.

Chris has become a passionate advocate for people living with lung cancer. He has joined an international patient support group and wants to help more people battling the disease.

He says it is time to pay it forward and make a difference in the lives of people living with cancer.

Join our efforts to bring access to treatment for people facing cancer around the world, donate today.

Meg Mager is a Senior Program Manager with The Max Foundation. In this role, she works with pharmaceutical companies and international distributors to increase access to cancer treatment for patients in low- and middle-income countries.

Go on the Patient Journey

Join Tony as he shares his story of learning about his cancer, gaining access to life-saving medication, and connecting with a community of care.
Follow Tony's Journey